SmartMonsters is a small indie games company specializing in online games for blind players. Co-founded in 1999 by CEO Gary Smith and CTO Mark Phillips, it's home to thousands of blind and sighted players around the world. Their games are at once retro - text! - and highly advanced, featuring some of the most sophisticated game AI you'll find anywhere. Their flagship role-playing game TriadCity is so advanced it's cited by The Cambridge Companion to Postmodernism as its culminating example of Postmodernist literature.

"Smart Monsters uses WhatIsMyBrowser.com's REST API to determine how to format dynamic Web pages for display based on client device type. We have three scenarios: desktops, mobile devices, and the in-app browsers employed by our mobile clients. Each incoming page request triggers a call to the REST API, where the result returned by WhatIsMyBrowser.com determines how we'll format our response.

We were afraid we were going to have to totally redesign our 20-year-old desktop-formatted site - read, spend lots of money - for contemporary mobile platforms. Instead, we're able to dynamically reformat our pages on the fly with just a few lines of code. We're able to do it with a single small Java servlet filter calling out to the WhatIsMyBrowser.com REST API. How cool is that! We truly could not be more pleased."

For this to work seamlessly, response times from the WhatIsMyBrowser.com API must be very fast:

In deciding on which Browser Detection solution to choose, Smart Monster's CTO Mark Phillips told us:

"We compared competing architectures for response times, stability, and up-to-date data. For us, all three factors are critical. Every page request to our site triggers an API call. The API has to be rock-solid reliable, with response times so negligible customers won't notice. And the results have to be accurate.

WhatIsMyBrowser fulfills our requirements easily, and accessing it over a REST API saves us having to periodically download and install updates to the detection libraries. With the API we know that we're always getting the latest and best detection. Since adapting it into our page flow we've served millions of pages without a hiccup. We're extremely pleased with our choice." 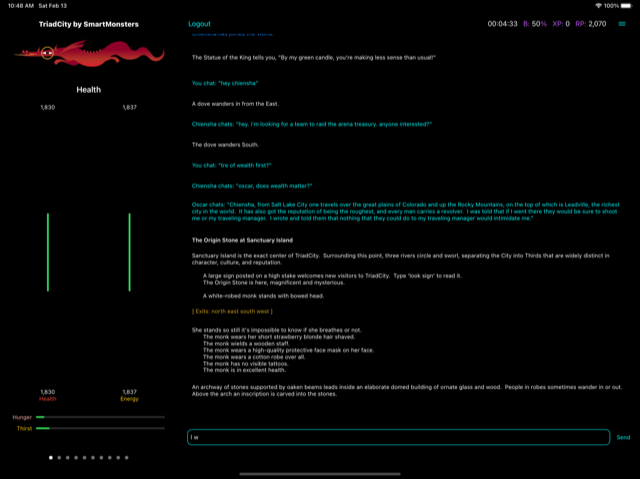 A screenshot of Triad City

The response times and stability SmartMonsters requires are made possible by WhatIsMyBrowser's robust API topology. WhatIsMyBrowser.com's founder Brett Harris explains it this way: "The WhatIsMyBrowser.com API is hosted on Amazon Web Services, which lets us seamlessly scale to handle any traffic demands. We're always closely monitoring our services to ensure that the API is fast and reliable."

Explains Phillips, "Naturally we want to re-use existing resources. Apple objected because these included navigation links to alternate forms of payment which would have competed with the AppStore. We have to strip these objectionable links while maintaining navigation integrity throughout our resources. Our ability to reformat on the fly based on the user's device was central to our being accepted by the AppStore. WhatIsMyBrowser.com's REST API makes this possible."

Phillips concludes: "Instead of spending six figures designing new Web sites we spend a few dollars monthly on REST API calls. Talk about saving our financial butts! We could not be more happy."

No Credit Card required, Free to use, Cheap for higher quotas